I am excited to do our very first review of something that helps us do what we love to do, which is snowshoe! We have access to amazing trails, parks, and great golf courses where the owners encourage winter activities like this. We just upgraded our snowshoes, so onto the first review, the Atlas Montane Showshoe.

I bought my partner a pair of Atlas Montane snowshoes for Christmas as a step up from the beginner Snow Mountain (Faber) 826 snowshoes she had from Costco. At 8″ by 26″, her old snowshoes were a little small to get good flotation on loose snow. Not that there have been a lot of heavy snowfalls in Nova Scotia the last couple years, but when it does come down it can come down hard. Most of the time the weight of the snowshoe is cited as the reason against a bigger size, but the difference in weight between a 26″ and a 30″ snowshoe is small enough that the added flotation that size gives is a bonus with almost no cost.

The Montane is actually a men’s snowshoe – Atlas promotes their Elektra Montane line for women, but it only comes in a 27″, which was not much of a step up from the 26″ she already had. Part of what Atlas promotes in their Elektra women’s snowshoes is that they have more of a tapered tail so they can fit closer together. That being said, the Atlas Montane already has more of a tail taper than almost any of Atlas’ other snowshoes. In fact, the only difference I could discern between the men’s and women’s was the shape of the tail taper. The woman’s Elektra Montane has a slightly concave curving tail taper where the the men’s Montane is slightly convex. Other than that, I couldn’t see a difference between the two models at all. Besides, the men’s Montane comes in a red anodized aluminum colour that’s really attractive. While I like to put technical considerations ahead of esthetic, I’d be lying if I said the fact these are a really nice looking pair of snowshoes wasn’t a factor in the purchase.

The Montane is a much better built snowshoe than the one Trish started with. Under the heel is heavily reinforced with a thick pad that feels quite solid. Attached to that is a rigid, and fairly large “crampon”. This area is where a lot of your weight is transferred to the show, and the heel is where the initial shock of your step lands, so I like that this shoe is built to take it. In store it felt really solid and reliable.

One thing I was a little trepidatious about was the binding’s suspension system. The snowshoes I’ve used have all had a metal “axle” that the boot binding could swivel on. It lets the foot swivel fore and aft, but restricts twisting and rolling. Atlas uses a totally different system they call their “SLS” for “Spring Loaded Suspension”. The intention is to let the foot/binding twist a little for a more natural feeling gait. I was a bit concerned about how tough it would be. What reassured me was that, on close inspection, I could tell it was a fiber-reinforced rubber. It’s something similar to what you’ll find in a car’s serpentine belt. It’s been a lot of years since I’ve had any belt in a car give out on me – modern fiber-reinforced rubbers are really good.

Some other Atlas snowshoes I looked at had what they call their “LRS” or “Light Ride Suspension”. It’s a similar system to the SLS but where the back part of the suspension isn’t bolted to the bottom of the binding, which means the tail of the snowshoe always drags. I couldn’t quite figure out why the difference. It wasn’t until the salesman explained that some people found the SLS system, with it’s ability to pull the snowshoe right out of the snow, caused some snow to flip up onto the back of their legs. Still this wasn’t really a consideration for us. We always wear gore-tex or similar pants when we snowshoe.

The SLS suspension system worked in the field just as advertised and walking in the shoe has a very natural feeling gait. It allows just enough give to let your foot twist and shift with the terrain without feeling even in the slightest like the snowshoe is loose. In fact, I wouldn’t really even notice my foot was twisting a little if I wasn’t actively concentrating on the feel of my gait. I did myself briefly own a pair of Atlas snowshoes with the LRS system when, after Christmas, MEC put snowshoes on sale. They didn’t have any SLS shoes on their clearance, and it had just snowed, so I wanted to get out with a new pair to match Trish’s new pair. So we can say with some real-world experience that the SLS system, with its ability to lift the snowshoe right out of the snow, makes it much easier to turn in place than snowshoes with LRS. The permanent tail-dragging of LRS snowshoes is really annoying. Enough so that I have since upgraded that pair to SLS shoes for myself too.

The flotation has been quite good on the Montane the times we’ve been out with her pair. Certainly quite a bit better than her old 8″x26″ pair. How much of that is just the size difference, and how much can be attributed to the design of the Montane is hard to say. The Montane has a rather more highly tapered tail than other Atlas models. This contributes to its ease of movement, but may be detracting slightly from the flotation. Still, it is a marked improvement over her old snowshoes.

What I liked in store, but hadn’t had any real experience with in the past (so it wasn’t really a purchase consideration), and as Trish just reminded me about, is the flip-up heel lift bar. This is the yellow piece you can see just aft of the bindings. It’s intended to let you flip it up in the field when going up hills. The snowshoe can rest at the angle of the terrain, but your foot is more or less horizontal. This makes going up hills much easier, and safer. Easier in that your foot is flat and it doesn’t put as much strain on your calves. Safer in that you can rest more weight on the rear under-heal crampons for better grip.

The bindings on the Montane are a pull-to-tighten system that is both simpler and better than the ratchet style found on her old shoes. They work well on everything from large arctic-rated Solomon Toundra Pro boots to the more petite boots she actually prefers.  The new Atlas bindings tighten around them both admirably. Its really simply, you just pull on the yellow strap to tighten. You can tug on either the fore or aft part to tighten either binding independently, but when I was helping her put them on I found you didn’t have to worry about them independently. You just pulled and they both sorted themselves out to the proper tension pretty much automatically. When you want to release it, just tug on the little black strap that attaches to both latches and it loosens right up. These are some of the best bindings I’ve ever seen.

The rear binding is a single strap with a pull-to-tighten system. It fits quite well into the rear binding notch her boots have. The notch in her Toundra boots is a little higher up than the snowshoe’s binding wants to go naturally, but this isn’t necessarily even a drawback since this causes a slightly downward pull on her rear binding that keeps her foot held nicely. In short, with it all done up her foot only moves as much as the SLS system flexes, and there is no boot-in-binding movement.

What I would have liked to have seen is the rear binding made of the same fibre-reinforced rubber that the SLS suspension system was made of. It’s just a plain rubber, and my concern is that it will over time (and with temperature differences) age and crack. I don’t know the exact polymer it’s made of, but it it does feel to me to be similar to the kinds of plastics I’ve seen become brittle with age due to oxidation. I bought these shoes from Mountain Equipment Co-op, and the person I talked to in-store, who himself is a big Atlas snowshoe user and fan, said that while very uncommon this strap has occasionally broken. They offer replacement straps in store and I was promised if it ever broke they would replace it free of charge. That being said, I think I’m going to pick up a couple to have in my backpack as a just-in-case. The same way I keep a spare tube when I cycle.

I’m not going to get more than one or two to have on hand now, though, since any I buy will be vulnerable to aging too. Like all models, though, eventually Atlas will stop making these snowshoes. If you get a pair of these, I’d recommend watching to see if it looks like they are moving away from this model. When it comes time that they are, then it might be wise to pick up several extra rear straps at that time. Keeping them in a sealed plastic bag will help prevent oxidation and extend their life and the life of your snowshoes.

We have been taking some pride in getting high quality gear to facilitate our activities. This is part of the driving force behind upgrading our original, beginner snowshoes. But we’re not made of money so we don’t have the luxury of repeat attempts. Paid for with hard-earned cash, we both have no compunction highly recommending these snowshoes to anyone else who wants to enjoy outdoor adventures. A great addition to our outdoor kit, these are definitely keepers. We rate these snowshoes two very enthusiastic smiles up. 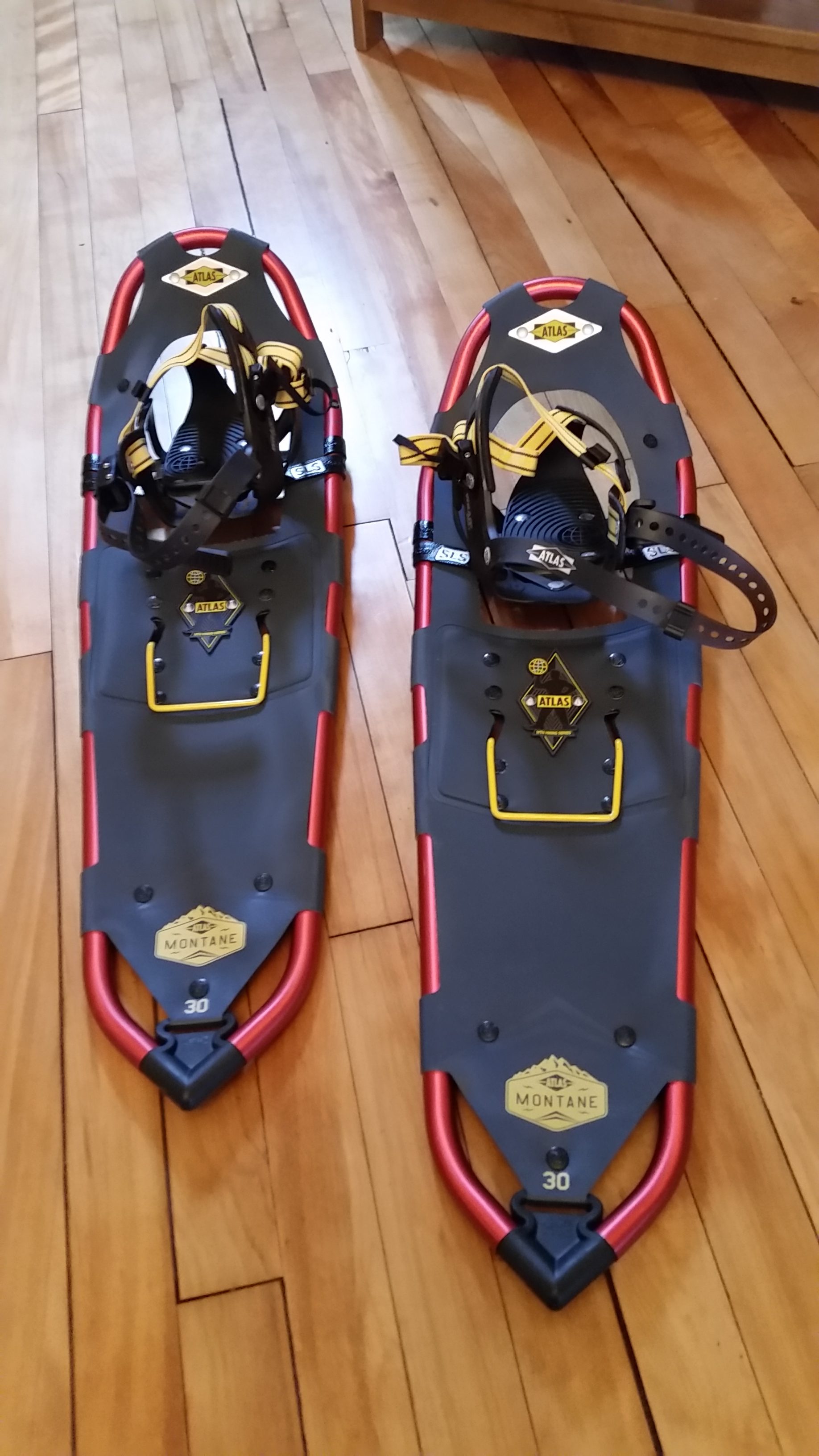